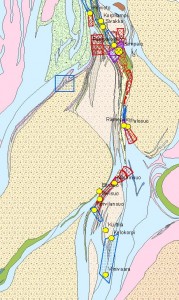 The Viinivaara license area (most southerly blue area on the map) has been obtained based on its preferable geological position in the Hattu-Ilomantsi greenstone belt. This is a part of Karelian Gold Line. Location: 25km NE from Ilomantsi, 90km NE from Joensuu. The area is accessible by a tarmacked road 6km from the area and a gravel road to the property. Total area is 9km2.

There are two late Archean orogenic gold occurrences in the licensed area which have been drilled– Kelokorpi and Viinivaara. (GTK, 2000)

The Kelokorpi occurrence comprises of a set of subvertical lodes defined by sulphide-gold dissemination and auriferous quartz±tourmaline veinlets in intermediate volcanogenic metasedimentary rock and tonalite. The occurrence is in the Kelokorpi shear zone. Native gold in the host rock is disseminated and associated with pyrrhotite and pyrite. In the quartz veins, native gold is associated with molybdenite, tourmaline, arsenopyrite, tellurides and pyrrhotite.

The Viinivaara occurrence is hosted by intermediate volcanogenic metasedimentary rock, and is located close to Korvilansuo (NE-trending) and Tsurkkila (N-trending) shear zones. Native gold is again disseminated in the host rock.

During the 2010 field season, some gold bearing boulders (with grades up to 4.8 g/ton) were found at the boundaries of the license area. Intensive soil sampling has since allowed localisation of the mineralised zone.

Exploration Potential of the area including Paasivaara – 0.5 – 1.5 Moz of gold.

MEN Finland continues exploration work in the area in 2011.

То read more about this project you can download presentation  in PDF format:  Viinivaara.